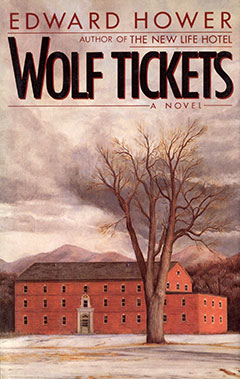 The late John Gardner called Edward Hower's first novel, The New Life Hotel, "an immense book in every way... an astonishing achievement." In Wolf Tickets the author moves his gaze from the world of emerging Africa to a locale no less exotic to most Americans, a girls' reformatory in crisis.

The Fairbanks School is an isolated institutional outpost in rural upstate New York. Its population is a multiracial gallery of troubled, tough, but immensely vulnerable and animated teenaged girls, presided over by a staff of counselors of wildly varying competence. In the street slang of Fairbanks girls, the phrase "I ain't sellin' you no wolf tickets" means "I'm not trying to scare you." And that's the way Steven Fox, a young, resourceful staff member, battles to keep fear and intimidation from controlling the lives of his charges. His experimental "New Program" offers them equal portions of freedom and responsibility. It's a volatile combination that some of them may not be able to handle. And, Steven fears, it may fly right in the face of what places like Fairbanks are really all about.

Edward Hower brings remarkable empathy to his creation of these girls: Ronnie, the tough, sharp, city-bred black floor leader; Yvonne, a refugee from the streets whose former pimp still holds her in thrall; Peaches, a beautiful blond child-woman; and Whale, an aptly nicknamed girl determined to see her daughter, who may or may not exist. At the center of the book is Katrina, the smartest but also the most rebellious of the lot; in the bond that grows between Katrina and Steven is the promise both of deliverance for her - and disaster for the Fairbanks School. Absorbing, utterly authentic, Wolf Tickets takes its readers into a world few of us will ever see, and moves us to care.

Edward Hower, author of The New Life Hotel and a teacher of writing, has undertaken an ambitious project with this new novel, and drawing on a combination of his personal experiences as a counselor in a New York girls' school and an almost underwritten simplicity of style he makes it work. There are a large number of characters, a racially mixed group of unwed mothers and street kids, plus an assortment of uninspired counselors at the quasi-fictional medium-security institution he calls Fairbanks' School. At the center is the energy created by Steven Fox, a committed young counselor, and 16-year-old Katrina, a veteran of numerous institutions. Fox is in charge of the third floor of the school, and he is experimenting with a program that seeks to balance freedom with responsibility. He sees in Katrina a potential leader, and as they move deeper and deeper into the program, the volatile personalities - both the girls and other counselors - begin to boil. There are many memorable characters. Hower takes you into their world, and once there you'll never forget them.

Hower's hard-cover debut - a gritty, fast-moving story about a group of hardened reform-school girls and an idealistic, sensitive counselor who struggles to change a brutal system.

Stevens, 35, divorced, has made his way from the Peace Corps up the ladder of the prison system. Now in charge of the third floor of the Fairbanks School for Girls, he finally has the power to implement his ideas, but a disruptive new girl, spiky 16-year-old Katrina, a veteran of countless institutions, threatens the harmony of his program. How Stevens and Katrina form a close bond and together fight the hostile system - personified by second-floor administrator Ben Palerno; hulking Nurse Evans; and "husband and wife" Peaches and Ronnie - takes up the body of the novel. Prison riots, lesbian romances, runaways, and fights add drama to a familiar story that Hower manages to keep fresh-through exciting narrative and carefully drawn characters. His portrait of a reform school's social organization saves Wolf Tickets from too many descents into Grade-B melodrama, as does the heartwarming story of Katrina's evolution from sullen outcast to confident leader.

It has the subject matter and pious flavor of a made-for-TV movie, but crisply told.