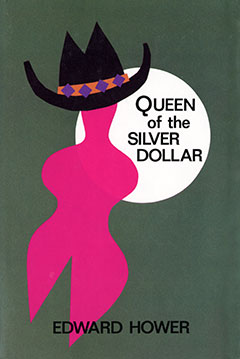 Queen of the Silver Dollar

Back home in Wyoming, June was a star bronco rider and a honkey tonk queen. Now, at 21, having ridden too many bar-stools into oblivion, she finds herself in The Pines, an elegant New England mental hospital/rehab center for out-of-control media celebrities, eccentric millionaires, and assorted troubled souls. Though she rebels against the therapy program, her off-beat exuberance and compassion win her the first real friends she's ever known. Among them is Jack, a mysterious young musician who thinks he may have killed his former girlfriend. June has numbed her passions with bourbon almost since puberty, but now that she's sober, the whole world - and especially Jack - attracts her with a dizzying urgency. Theirs is one of the oddest, funniest, sexiest romances in contemporary fiction.

Queen of the Silver Dollar is an eloquent sensitively written novel about self-discovery and the healing powers of love.

Oversized June Chatwin, a 21-year-old who wears a big black Stetson, is good at listening to other people's problems - a good thing since the former rodeo rider, general outsider and recovering alcoholic has landed herself at a Connecticut asylum so elitist that the inmates are referred to by the staff as "guests" and the hospital stationery reads "The Pines... An Inn." Sober for the first time in years, she takes new pleasure in learning about other peoples' lives, and she's surrounded by fascinating personalities: a screenwriter whose one smashing success no one remembers; a ballplayer with the weight of Harlem on his shoulders; and Jack, a native New Englander who assures her just after they meet that she's "not ridiculous," the most romantic words she's ever heard. With all her energies focused on others, however, how will June find the time to focus on her own past - which includes getting gang raped on the bar of a gin mill - and her gay brother's attempted suicide? Hower's (Night Train Blues) fifth novel is frequently amusing and insightful, although Jack and June both seem much older than in their 20s. The questions that unfold are emotionally charged: Will they become lovers or friends within the confines of the country club/institution? Will their relationship survive in the "real world" if and when they both get out? Readers will root for June as she learns that the best therapy often comes from other patients rather than from professionals. More importantly, she learns from her friendship with Jack that the biggest ghosts from our pasts are often ourselves. (Sept.)