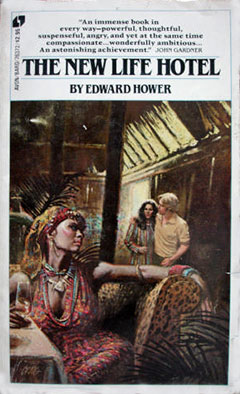 The New Life Hotel is the story of three people caught up in a whirlwind of political and emotional upheaval in contemporary East Africa. Gordon, a young white schoolmaster, comes to the newly independent nation of Marembo hoping to find some purpose in his life. He falls in love with a half-caste barmaid, Adija, who works at the New Life Hotel, a local bar. Her energy and beauty seem to him to mirror possibilities of the young continent, and he throws himself deeply into their love affair despite the shocked disapproval of his colleagues at the local boarding school. But Salome, the earthy, strong-willed owner of the New Life Hotel, also loves Adija. She has already spent years fighting for her country's independence from colonial rule, and sees great danger in Adija's attraction for the foreign teacher. The New Life Hotel is also a centre of political intrigue, and the lovers' story soon becomes entangled with tribal rivalries and plots to destabilize the new government, with tragic results.

This is a bold, brilliantly written first novel with a convincing sense of place and living characters. Edward Hower powerfully portrays the dilemmas which face men and women, white and black, as they take control of their own destinies.

Edward Hower's The New Life Hotel deserves praise for, among other things, being an original paperback and therefore within the financial grasp of many. It is also a very well-written book and one which, for all its length (the print is very small), is a remarkably quick read. It is smoothly paced, the dialogue sounds authentic and the characters are real and complex.

This is, essentially, the story of two African women, Adija and Salome. They are not whores, yet they occasionally sell their bodies. They are not peasants, though they sprang from peasantry. They are not revolutionaries, yet by their very originality and their refusal to accept the traditional limitations of the African woman's role, they are radicals.

Salome is half-owner of the New Life Hotel, a frontier bar in East Africa. Adija charms Salome and secures a job as a waitress there. Adija soon becomes involved with a young American, Gordon, a teacher at a nearby boys' academy. Gordon is a well-meaning, awkward man whose voguish values (he rides a bicycle instead of a car) seem out of place in a land where everyone is still struggling to acquire more things.

But the details of plot are less important than the picture of an emerging Africa that Mr. Hower gives us. Its people are emerging, too, into the frightening chaos of a world beyond the village. Or are they emerging? Are they perhaps sinking deeper into the muck of modernity with every step they take away from the village? Yet In the village there was no room for Salome or Adija to become more than baby makers and slaves. So they have left. The New Life Hotel is a beautifully rendered story about the terrifying and complex world they discover.

Todd Walton is the author of Inside Moves and numerous short stories. His most recent novel is Forgotten Impulses.

The New Life Hotel by Edward Hower is full of displaced persons. Central to its narrative are three of them: Salome, exiled from her village, who now runs a sleazy bar in Marembo, a recently independent East African nation; Adija a half-caste who works with her; and Gordon, an idealistic American trying to speed the emergence of the new Africa. Like Marembo itself, they are oil in a state of transition, never more than precariously stable. Pulling itself free of the last clutches of colonialism, the country topples into a military dictatorship. Similarly, Hower's three main characters lurch awkwardly from unhappy pasts into gloomy futures.

Not that the book as unremittingly bleak. Wideranging in content - as crisply informative about a mission school as a bar-cum-brothel, about tribal ritual as city routine it also encompasses a variety of tones. Amongst these, wry comedy seems Hower's real forte. Though the novel finally explodes into a welter of violence, it is most assured when sardonically charting lesser skirmishes such as those within a school when Gordon, attempting to reform a syllabus composed of material like Common Mistakes Using Gerunds and She Stoops to Conquer simultaneously, alienates European staff and African pupils. Occasionally - with some rather clamorous witchcraft imagery and recurrent, high-coloured, dream-sequences the novel nears the garish. But its swervings towards melodrama are generally curbed by Hower's often biting perceptiveness.