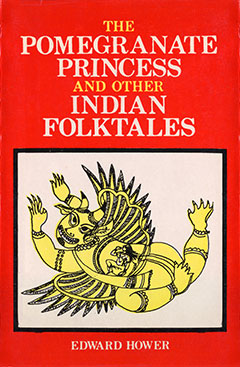 The Pomegranate Princess and Other Tales from India

In many parts of the world today, tales of magic and wonder, princesses, and giants are found only in books. But in the villages of India, such stories can still be heard - told by mothers and grandmothers to children in peasant huts and ancient palaces and recounted to a gathering of villagers. It was in settings such as these that the tales collected in this book were recorded by Edward Hower in the mid-1980s. The fourteen tales in this collection are eloquent reflections of the great cultural traditions of India and stories that can bring enchantment to audiences anywhere.

In many parts of the world today, tales of magic and wonder, princesses, and giants are found only in books. But in the villages of India, such stories can still be heard - told by mothers and grandmothers to children in peasant huts and ancient palaces and recounted to a gathering of villagers. It was in settings such as these that the tales collected in this book were recorded by Edward Hower in the mid-1980s.

This entertaining and insightful volume features folk tales with motifs that appear in European stories, but are thought to have originated in India - the giant who cannot be killed because his external soul is concealed in a bird, witches who enchant handsome young men, and helpful animals and birds. There are quest tales, a Numbskull tale, and stories of inanimate objects that can speak.

The stories reflect a specifically Indian culture. The gods Vishnu and Kali appear, and the wicked stepmother is replaced by a jealous co-wife. There are wandering holy men, lepers, elephants and cobras, and wives who sacrifice their lives out of love for their husbands. One of the most interesting aspects of these tales is the way in which they have been brought into the modem world. In 'The Hying Prince," the hero travels in an airplane instead of on a giant bird, and in 'The Hungry God," news of miracles spreads through the village "like electricity."

The stories in The Pomegranate Princess and Other Tales from India were collected from a variety of informants: elderly peasant women, a young teacher, the wife of a hereditary landlord, and a charan - a member of the traditional caste of bards. These tales are both eloquent reflections of the great cultural traditions of India and enchanting stories for audiences everywhere.

Edward Hower received a Post-Graduate Diploma in Education from Makerere University in Uganda, and an M.A. in social anthropology from the University of California in Los Angeles. He is the author of two novels published in the U.S. and England, The New Life Hotel and Wolf Tickets.

M. K. Mukerjee, a graduate of Alahabad University, is a retired teacher and school administrator from Jaipur, India.

This slim, elegant little book, attractively bound and illustrated, is tailor-made to flip through for a short trip to the Indian countryside. Reading this book, one goes into the ocean of the past - a past that is the present for the Indian masses, who still enjoy folktales. People repeatedly tell stories heard from elders, parents, and others for the benefit of any interested listener. Hower is lucky to have been able to understand and appreciate these tales, with the able help of Mrs. Mukerjee and Mr. Soshi. Together, they have done justice to the richness of the Indian oral tradition.

The magic of folktales is the product of idleness and leisure. Scholars of past traditions must know that people today have less time for telling and listening to folktales than they did in earlier times, when they lived closer to nature and were surrounded by familiar sights and sounds. This book freshened memories of my own youth decades ago, when I collected hundreds of folktales, songs, and sayings from villagers. In the beginning it was a hobby, then later my first professional love and the subject of my Ph.D research. In Rajasthan such tales are told not only by the folk but by the educated classes as well. The art of the folktale flourishes both in the villages and in pockets of the cities.

The appendix, with cross references and notes, is very helpful for understanding the details of Rajasthani society and culture. It also indicates the parallels in human emotions and expressions in various times and places. I wish to stress, however that the folktales are more delicate and, at the same time, forceful in the original Rajasthani dialect than in English translation (the same problem exists with any translated work, of course). These folktales sparkle not only for the Rajasthanis but for anyone who takes the time to listen. There is much sociology, psychology, religion, and culture hidden in their content. Millions of people believe in them and enjoy their escapist power.

Today the thrill of the storytelling art has been much diminished by cinema and television, Still, it is too early to write storytelling off entirely, as it retains its effectiveness as a means of entertainment, education, and the imparting of wisdom, knowledge, and tradition. People in the countryside are especially attached to folklore, where little guys can fight giants and win, where heroes and gods intermingle, where life is hard without mechanical gadgets, and where even the best parents can't always protect their children. Hower provides a variety of whimsical experiences in this book, with tales from literates and illiterates alike. Most of the stories need no explanation, revealing their character of themselves.

The title story, "The Pomegranate Princess," is a beautiful expression of the classic theme of victory for the truthful and punishment for the wicked. However cruel and calculating one is, one day the end comes and justice prevails. Almost every culture possesses this belief, in order, perhaps, to encourage people not to lose faith in hard work and the justice of the Absolute. Such stories lead the listeners into a special world where the heroes are all role models, where life is governed by principles, and where the good always survives the bad.

"The Princess and the Witches" is a story of intrigue. In the end the fortune of the princess rises and that of the witches falls. It is believed, not only in Rajasthan but all over India, that witches live in trees and have twisted feet. Tree worship is a common belief among desert people, to whom trees and plants are very dear. To water plants is considered a meritorious act by rich and poor alike.

The illustrative power of simile is used in an attractive story entitled "The Songs of Naina Ba'': "Her teeth sparkled white the way a stream does as it goes rushing into a patch of bright sunlight." In another story there is an airplane, called in Rajasthani folklore a cheel-gadhi (literally, "flying machine vehicle"). "The Coconut Lady" conveys the lesson that scheming to harm others one day results in bad luck for oneself. "The Leper Prince" teaches that one should help any creature of God regardless of what it might be, since it may have a part to play in one's own fortune. Another message of this tale is that even the darkest night ends at sunrise; one must be and trust in oneself to pass through trials. "The Clever Rat" is about a rodent who often succeeds, but fails in the end (unlike in most stories, where the hero wins).

The eleventh story, "The Two Kings," is unusual in that its subject is the cannibalism of Durga. This is the first I have ever heard of such a tale in either the oral or classical traditions. The sacrifice of King Karna is a popular subject in Indian legends and myths. (Bers, incidentally, are not small apples but small berries.) "The Golden Bird" and "How the Well Was Purified" repeat the lesson that kindness to birds and animals has its advantages, as the one who is gentle to all creatures receives their help in times of difficulty. Many stories, like "The Great Hunter," concern hunting, which was a great pastime among the Rajasthani aristocracy. "The Hungry God," in which a simpleton defeats a crafty, crooked opponent, teaches that honesty and purity of heart are rewarded by prosperity.

This book proves that in rural India "there is always time after work to visit the temples, to decorate houses with designs of white lime, to join the neighbors for festivals and weddings." Not only do the tales have a powerful influence over people, their telling has also becorne a ritual in itself.