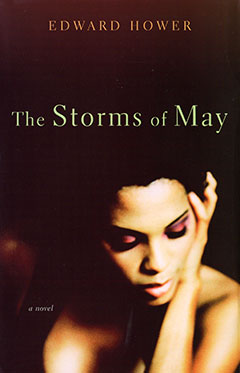 The Storms of May

Hower's characters are totally engaging, and the reader is quickly caught up in their lives. The Storms of May is charged with suspense and full of surprises.

In The Storms of May, Ruth Sullivan, an idealistic young woman with a troubled past, runs a group home with her artist husband, Mike. Together they care for five at-risk teenage girls as volatile and erratic as they are appeling. Her heart goes out to the troubled kids, but as she struggles to help them turn their lives around, a mysterious girl who calls herself May Royale arrives like a typhoon, noisily upsetting the home's fragile peace. Soon May introduces to the scene her boyfriend, Paco, a flashy former gang member desperate to escape his family's criminal legacy. Paco, like May, is not all he seems at first, as Ruth discovers to both her delight and terror. Her involvement with him pushes her courage to the limits as she test both her convictions and her marriage.

A new arrival shakes up a group home for at-risk teenagers, in this strongly plotted and characterized latest from veteran, Hower (A Garden of Demons, 2003,etc.).

Narrator, Ruth Sullivan, knows a fair amount about dangerous behavior from her own promiscuous, drug-addled past. Husband, Mike, fathered a child with an African woman before Ruth met him in Tanzania, where they ran a school before getting married and returning to the States. So they're non-judgmental (but not enabling) about the five girls who live with them in a state-funded residence on the bleak outskirts of New York City. Hower's former counseling experience shows as he swiftly and cogently sketches the personalities and grim histories of overweight Darlene (whose mother is dying of AIDS), sexy Mafia daughter Gina, perennial runaway Sally (fleeing abusive parents), Native American Rose ( a recovering alcoholic), and 16-year old former prostitute Valecia. None of them are prepared for May, who blows in after a "disagreement with the cops at the Greyhound station" and tolls a pack of lies about everything from her racial background to her age. She's abrasive and provocative, leading the others in a brawl at school that gets her arrested again, but she's also oddly vulnerable. When she brings home new boyfriend, Paco, a paroled convict now counseling drug-addicted kids, the emotional and social complications set in motion threaten to destroy the home and the Sullivan's marriage. Hower does a particularly good job of delineating their martial tensions (not enough sex, lingering resentments from previous infidelities, etc.), but he also shows the affection and commitment that binds the people, though neither can say for how long. His matter-of-fact portrait of the girl's and Paco's struggles quietly make the point that their problems stem as much from poverty and lack of opportunity as from any personal failings. Inevitably, violence sparks the denouement, but Hower also suggests there's hope for characters we've come to care about.

Solid, old-fashioned fiction updated with frank language, sex, and an underclass milieu: a natural for any reading group not wedded to middle-class domestic dramas.