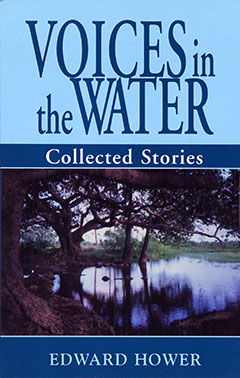 Voices In The Water

Most of the stories in this collection have appeared in Atlantic Monthly, Epoch, Southern Review, and other leading literary magazines. There are love stories from India, fantastic tales set in Africa, and many American subjects-- including a shy woman's romantic adventures on a luxury liner, a father longing to protect his children, baseball heroes coming to life in Brooklyn, and a young man's awakening to the joys of sensuality. Eight of the book's seventeen stories were, after publication in magazines, changed into chapters in some of the author's novels.

My grandfather, a pauper at the end and a lifelong athiest, spent the last months of his life building a church on the grounds of a state mental hospital, where he lived in the old folks' wing. All day he collected pebbles and pressed them down in long straight lines on a dirt area that the staff called the recreation yard. Sometimes he knelt down under one of the oak trees and called on the Lord to reveal exactly where He wanted the walls erected.

My grandfather was a huge man with a smile that collapsed his toothless mouth and made you think of a jack-o-lantern left outdoors too long after Halloween. But it was still a salesman's smile: sometimes he could be heard discussing the price of stained glass to Jesus in the same hearty voice he'd used to pitch vegetable peelers, home wine-making kits, and all the other products that had so often landed him in bankruptcy courts.

His behavior was no stranger than that of many other patients, such as the lady who sang obscene nursery rhymes all day, or the man who collected his drool in a jar, or another man who carried a cardboard sword and called himself Robert E. Lee. People got used to seeing my grandfather lurching about the grounds in his baggy raincoat and squashed fedora hat, searching for small stones. At first no one paid much attention to his church. But after a while, it gave him so much to talk about at meals that everyone began discussing it, as if they, too, could see walls rising outside the dining room window.

One Sunday morning, the old man announced that the church was finished. He cleaned himself up for the first time since he'd arrived at the hospital. He brushed his white hair, shaved the stubble from his chin, put on his double breasted suit and a wide hand-painted tie. Then he walked out onto the yard and, standing at one end of his pebbly diagram, delivered a sermon. No one came to hear it, but several residents sat in canvas chairs under a nearby tree to watch him wave his arms and shout across the grounds. After the service, he made a sharp right-angle turn around an invisible altar and left by a gap in the pebbles. He rejoined the others under the tree, mopping his brow with a big checked handkerchief.

The next Sunday, five or six residents got dressed up and attended his service. The following week, there were a dozen or more. Ladies took dresses they hadn't worn in thirty years out of suitcases. Men brushed out suits and made special trips to the thrift shop in town to select colorful neckties. The staff helped them drag chairs out to the pew area, and some staff brought chairs for themselves as well.

Soon, nearly everyone was attending the Sunday services. A choir was formed, which the old man rehearsed and directed. Someone supplied a wooden cross. The staff made an altar out of orange crates and a table cloth. Robert E. Lee left his sword outside, the drooling man put his jar on the altar as an offering, and the woman with the obscene nursery rhymes recited them only to herself during the services, her voice getting quieter each week until finally her lips stopped moving altogether.

As long as the weather stayed warm, it was pleasant to sit in the sunlight surrounded by lines of pebbles, listening to the old man's voice fading in and out of consciousness. When he pointed at the Bible scenes he said were depicted in the stained glass windows, everyone gazed up, seeing not merely expanses of blue summer air, but New Testament pictures in blazing red and gold. The preacher's sermons were quite lucid and full of good jokes. One Sunday, he married two of the residents. The staff began to bring their families for services. The local newspaper featured him on its church news page.

He died in the fall, just as the weather was growing chilly. On a gray Sunday morning, the residents and staff put on warm clothes and held a memorial service for him in his church. Then all the pebbles were raked up before the rains could wash them away. The residents selected bright colored ones to keep in their rooms. There were enough left over to border a flower garden, which was named after him and dedicated with a bronze plaque.

The church was the only successful venture of my grandfather's life.